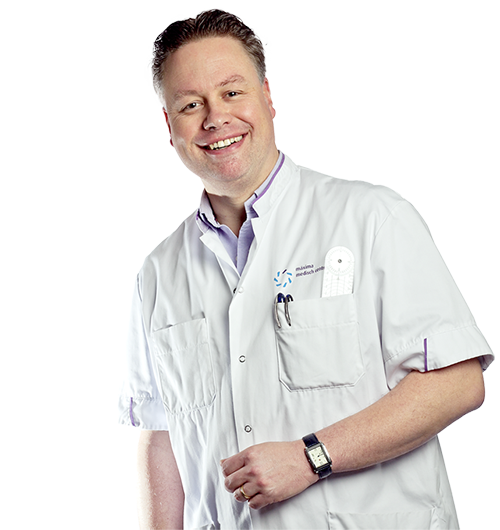 Recently, 2 new publications from the reserach group led by Prof...

A young sports woman (24 years old) describes her experiences of an anterior cruciate ligament reconstruction after knee injury with football.

It is now a year after I ruptured ny anterior cruciate ligament. During a football match, I twisted my knee while turning away from my opponent. It hurt very much and I was taken to the emergency room.  An MRI was made later on which showed a rupture of the anterior cruciate ligament.  The advise was rest and physiotherapy to regain my knee motion. The orthopaedic surgeon referred me to dr Janssen. In the meantime, the physiotherapy helped me to walk and cycle again. The pain disappeared.
Three months later, my anterior cruciate ligament was reconstructed with hamstring tendons. The surgery went very well. Luckily, my meniscus and cartilage were not damaged. I was very motivated for my rehabilitation. Every session with the physiotherpaist improved the condition of my knee. I started with light weight exercises, cycling and to learn how to walk properly again. Then came more strengthening exercises, steps, and balance exercises. After a few months, I was able to do football training which felt very good.
Dr Janssen was also very satisfied. At the third appointment (5 months after the surgery), he told that my knee had recovered. I felt confident to restart my football training program. With lots of patience, training and a good doctor, I am again able to play football at the same level as I played before my injury!