Recently a new publication has been...

RPA janssen MD PhD Prof is memeber of the PaTIO study group. Recently, a publication has been...

Recently 2 new publications have been accepted in peer reviewed journals. These... 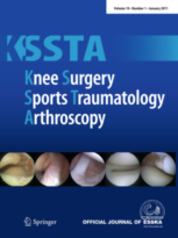 Prospective analysis of regeneration of gracilis and semitendinosis tendons after anterior cruciate ligament reconstruction. MRI is performed préoperatively and at 2 weeks, 6 and 12 months postsurgery. The gracilis tendon regenerated in all 22 patients. The semitendinosus tendon in 14 patients.