RPA Janssen MD PhD will oresent a keynote lecture at the Advanced Knee Course of the Dutch Arthroscopy... 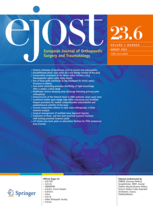 The primary aim of the study was to evaluate the range of motion and complications after Genesis II total knee arthroplasty with high flexion tibia insert (TKA-HF). Furthermore, difference in knee flexion between high flexion and standard inserts was compared. The hypothesis was that knee flexion is better after high flexion TKA.

A total of  292 TKA-HF  were retrospectively reviewed. Mean follow-up was 24.3 months. The range of motion was compared between TKA-HF (high flexion group) and a comparable cohort of 86 Genesis II TKA with a standard tibia insert (control group). Surgeries were performed by one experienced knee orthopaedic surgeon.