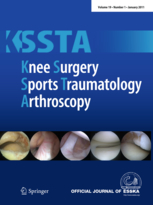 Purpose: A review is provided on the existing knowledge about the specific healing phases of the intra-articular hamstring tendon graft used for ACL reconstruction. Differences between human and animal in-vivo studies are explained and implications for the postoperative time period are laid out.
Methods: A systematic review of the existing literature was performed on the topic of tendon remodelling of hamstring grafts in ACL reconstruction using Medline database. Publications between 1982 and 2012 were included. Special focus was directed on in-vivo human and animal studies analyzing intra-articular free tendon graft remodeling.
Results: Animal and human in vitro and vivo research have demonstrated three characteristic stages of graft healing after ACL reconstruction: an early graft healing phase with central graft necrosis and hypocellularity and no detectable revascularization of the graft tissue, followed by a phase of proliferation, the time of most intensive remodelling and revascularization and finally, a ligamentization phase with characteristic restructuring of the graft towards the properties of the intact ACL. However, a full restoration of either the biological or biomechanical properties of the intact ACL is not achieved.
Conclusion: Significant knowledge on human cruciate ligament remodelling has been added in the understanding of the processes during the course of graft healing. Most importantly, the remodelling process in humans is prolonged compared to animal studies. While today´s rehabilitation protocols are often extrapolated from findings of animal in-vivo healing studies, current findings of human in-vivo healing studies might require new postoperative regimens following hamstring ACL reconstruction.